Unit Load Devices (ULD) are used as containers for baggage and cargo carried in the holds of suitably dimensioned and equipped aircraft and are secured so that they cannot move within the hold in flight.

On passenger aircraft, a record of which checked bags are stowed in which ULD is normally kept so that if it is necessary to retrieve a particular item prior to flight, it should be known which ULD it has been loaded in. On cargo aircraft, ULDs are often used in combination with netted pallets. In all cases, the aircraft hold must be equipped with a roller floor and the straps and fittings (accessories) necessary to secure the containers and/or pallets in position. 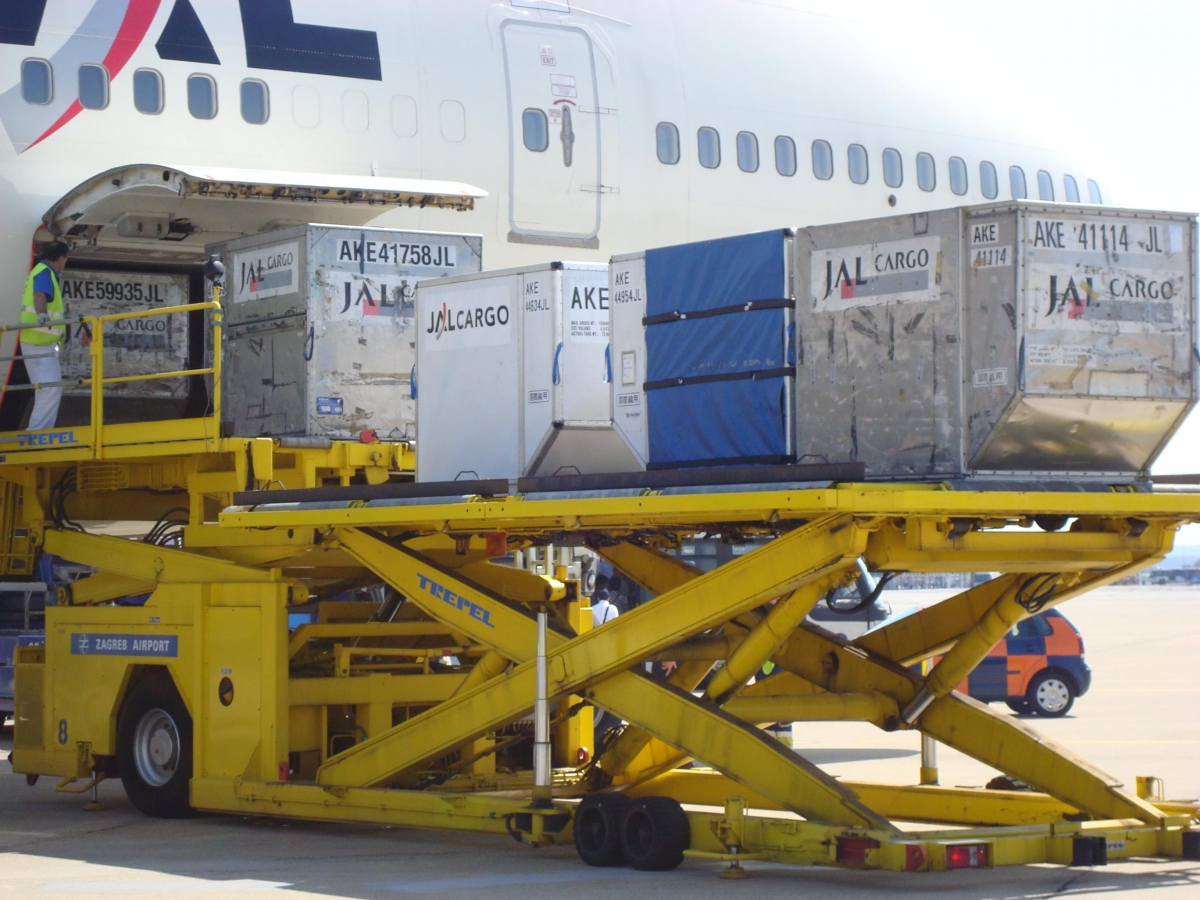 Unloading ULDs from a Boeing 747

Containers and pallets should be identified by a unique combination of letters and numbers. The IATA standard system comprises 3 leading letters, 4 or 5 numerals and 2 trailing letters. The 3 leading letters (eg AKE, PMC) define the type of ULD, the 4 or 5 numerals are a unique number allocated by the operator and the 2 trailing letters show a 2 letter ICAO code which indicated the owner which may be an airline (eg BA) or a ULD leasing company (eg JG). Full details of the coding standards are found in the IATA ULD Technical Manual. ULDs may also carry a bar code, which will usually replicate the visible IATA-standard code.

Containers, pallets, and nets are in most cases required to be approved for use (“certified”) by the airworthiness authority for the country where the manufacturer is located. Currently the 2 most commonly used certification standards are:

though other countries such as China, Australia etc have complementary standards for certification of ULD.

In order to obtain approval or certification from the authorities, the designer must submit calculations and test results to show that the ULD is able to withstand the loads required while being restrained in the manner laid out in the TSO standards. These loads are extremely high, in order to prove that the design is capable of restraining the contents of the loaded ULD under extreme flight conditions, for example:

The great majority of ULD are designed and sold as certified ULD, however there are some exceptions. These can be identified by the first letter of their identification code:

Certified ULD must be used on all aircraft which have holds that are of insufficient strength to contain their contents during extreme flight conditions and rely on the ULD being locked to the floor of the hold. Non certified ULD may be used in an aircraft having a hold structure which is deemed capable of withstanding the forces from the contents during extreme flight conditions. An example of this is the B767 Series, which not only has holds designed to withstand these forces but also uses a base size for its containers that is unique to the aircraft type (units known as DPE (LD2), DQP (LD4) and DQF (LD8)).

While airlines may choose to make their own definitions as to exactly what types of ULD may or may not be loaded on their aircraft, it should be remembered that many ULD are transferred between aircraft and even other airlines before reaching their destination. Whether certified or non certified, no damaged ULD or pallet should be used for aircraft loading purposes.

Correct use of ULD

A ULD not loaded in compliance with these instructions may very well not be able to carry out its defined purpose of providing restraint to the contents in flight, and should not be allowed on board the aircraft.

Loading of pallets is similar to loading containers; particular attention should be given to the cargo net being used to secure the load to the pallet. Cargo nets are subject to severe wear and tear and are often found to be unserviceable, however there is an all too common tendency to use cargo nets in an unserviceable condition or to attempt some kind of “unauthorized repair”; neither of these actions is acceptable. Indeed, any attempt to carry out an “ad hoc” repair of a damaged ULD using any kind of material or process not specifically defined by the owner airline’s manuals is not acceptable, including but not limited to:

Certain types of ULD may have OEM approved “temporary repair” solutions; if so, these may be used but only as defined by the owning airlines documentation.

Containers are typically lightweight structures comprising a structure of aluminium extrusions, a relatively thick ( 2.5mm - 4mm) aluminium base sheet, aluminium or composite side and roof panels, and a fabric or metal door. By necessity they are made as light as possible, however they may be subjected to extremely severe handling conditions. The rapid growth of air travel, especially air cargo, over the past 10 years has resulted in some ULDs being handled in sub standard facilities using inappropriate handling practices. Any resulting damage is not only a cost to aircraft operators but may also creates a condition which is hazardous to aircraft safety.

The various published industry standards covering handling of ULD all call for ULD to be supported at all times on dollies/roller beds/racking. These standards also state clearly that unless a ULD is specifically designed to be handled by a forklift it should not be so handled; otherwise damage may result.

With the exception of a ULD which is approved for forklift handling, they should never be left on the ground even if empty.

Empty pallets may be stored in stacks, taking care that:

Nets may be permanently attached to a pallet (along one side by locking the fittings in place) or may be completely removable. If removable they should be stored in a dry location.

Loaded ULD must always be stored on a suitable transfer vehicle such as:

and only be transferred using special purpose equipment equipped with rollers/ ball mats or similar support/ transfer devices. Specifications for most of these equipments may be found in the IATA Airport Handling Manual. Chapter 9. Poor handling may well result in a ULD, which was perfectly serviceable when loading commenced arriving at the aircraft door in an unserviceable state, resulting in off loads, delays , reloads and other inconveniences.

Use of “Accessory Items”

2000 lbs straps are generally used in the bulk holds of aircraft (such as 737 holds) while 5000 lbs straps are used to secure loads to pallets/containers. The use of cargo straps to secure any piece of cargo in lieu of a net requires great care and should only be done in accordance with the carriers specified procedures. General guidance can be found in the IATA ULD Technical Manual Standard Specification 60/2 Appendix A which is a simplified version of ISO standard 16049 Part 2, but this cannot replace specific airline instructions.

Tie down fittings are generally a double stud with a 2” dia.welded stainless steel ring. These may be used to connect a tie down strap terminated only with a hook into the pallet edge rail. They are not to be used as “temporary repair” for cargo nets, nor as some kind of additional lashing process.

Both straps and tie down fittings may only be deemed safe when issued by the owner airline. The use of a strap or fitting picked up from the floor of the terminal is unsafe. At present there is no certification standard for straps as there are for containers, pallets and nets, however a standard is in process and awaiting FAA implementation.

The primary purpose of ULD is to improve flight safety compared to bulk loading of holds. Whilst a serviceable ULD, properly loaded, will indeed achieve this, a widespread lack of attention to/ awareness of ULD damage can result in risk arising from the use of containers that are not within their allowable damage limits. The still common attitude that “it doesn’t matter as long as the cargo/ baggage makes the flight” and a widespread lack of adequate training for those involved in ULD operations can seriously impact on aircraft safety.

Damaged and/or improperly loaded ULD present a hazard to operators, aircraft systems and structure, cargo and baggage and GSE. Used correctly ULD will remain within their safety limits for many years, requiring only minor repairs to wear and tear type damages. Incorrect handling of ULD, particularly the indiscriminate use of forklifts will result in ULD damage rendering them unserviceable for use.

Failure to observe rules and a “make it up as we go along “ approach to ULD operations will result in safety breaches.

The solutions to these safety risks are found in: