Unmanned free balloons are mostly used for scientific purposes. They usually operate at very high levels (i.e. above 60 000 ft / 18 000 m). While at these levels they are not a considerable hazard to other aviation operations, the ascent and descent phases need specific attention.

Unmanned free balloons use light gas (hydrogen or helium) as hot air is impractical for reaching their high operation altitudes. Based on the volume of the gas, balloons are divided into "zero-pressure" and "superpressure".

Zero-pressure unmanned free balloons change their shape as they ascent (see image below). The reason is that as the balloon rises, ambient pressure gradually decreases and the gas inside extends until it equates that pressure. 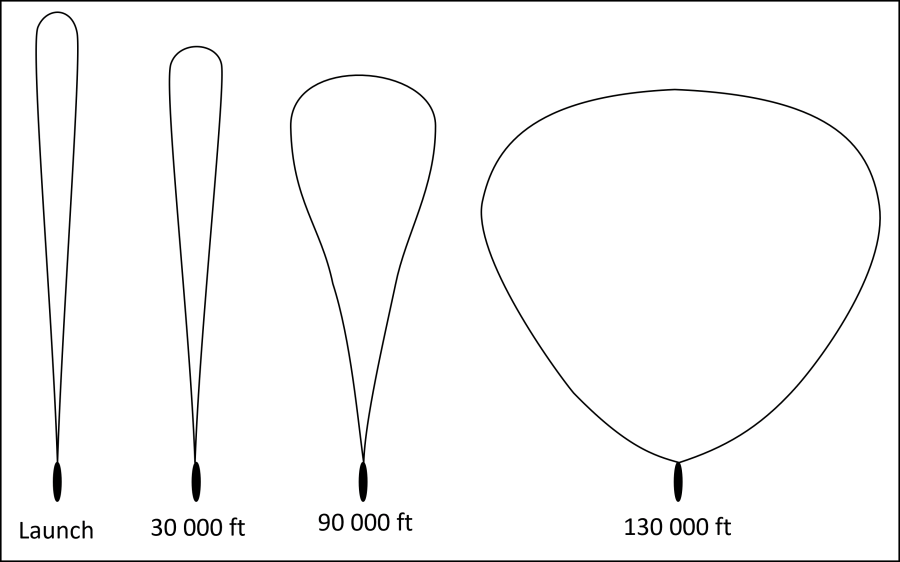 Superpressure balloons keep relatively constant volume regardless of the altitude. Therefore, in the high altitude case, the pressure inside is much greater than that of the ambient air. Depending on the strength of the balloon envelope, the pressure difference may cause the balloon to burst. This phenomenon was the reason for the development of zero-pressure balloons.

Unmanned free balloons are classified as ''heavy'', ''medium'' and ''light'' according to the criteria, specified in Annex 2, Appendix 5. Heavier balloons are subject to stricter requirements. The most important criterion is the combined payload weight:

Additional criteria are defined for specific circumstances so that some unmanned free balloons may be classified as "heavy" even though their combined payload is less than 6 kg if they pose increased risk in case of impact, i.e. if:

ICAO has defined procedures for the operation of unmanned free balloons in Annex 2 and other documents. Some States have developed further requirements and procedures. In general, unmanned free balloons must be operated in a way that ensures the safety of other traffic as well as persons and installations on the ground. Since the options for control of this aircraft type are extremely limited, the procedures focus on balloon identification and traceability and mitigation of the collision risks.

Unmanned free balloons need to comply with various requirements before they launch, e.g.:

The termination devices/systems are to be used whenever it is considered that the flight poses a threat to other parties or prior to unauthorized entry into the airspace over another State’s territory.