Use of Personal Electronic Devices (PEDs) on Aircraft

Use of Personal Electronic Devices (PEDs) on Aircraft

The rapid increase in use of and range of PEDs has led regulators to re-assess their policies on PED use on board aircraft used for commercial air transport. Although there was never any documented evidence of risk to flight safety, for many years, the “Precautionary Principle” was applied and the use of all PEDs was banned during critical phases of flight (takeoff / initial climb and approach and landing), this being usually defined by the illumination of the seat belt signs during those flight phases.

Following the issue of revised guidance, airlines regulated by the U.S. Federal Aviation Administration (FAA) or the European Union Aviation Safety Agency (EASA) are able to permit passenger use of PEDs operating in non-transmitting mode in all phases of flight as detailed:

It is expected that other regulatory agencies will follow with similar guidance to their commercial air transport operators.

Under the guidance issued by FAA and EASA, any PED which is capable of transmitting and receiving - termed a T-PED - must still be selected to ‘Flight Mode’ or ‘Airplane Mode’ before take off and remain so until after landing so that their transmitting and receiving capability is disabled. Any T-PED without such a capability must remain off throughout the flight. The guidance on extended use of PEDs is permissive rather than mandatory and it is therefore at the discretion of each airline whether its provisions are used. Before allowing more extensive use of PEDs on board, operators are expected to carry out a risk assessment exercise to ensure that any identified hazards are appropriately managed. The FAA has provided detailed guidance on how it is expected that this will be done: Supplement to FAA InFO 13010 “Aid to Operators for the Expanded Use of Passenger PEDS”. Each airline which chooses to relax their PED use policy is required to inform their safety regulatory authority of such action and confirm that appropriate risk management is in place.

It should be noted that, whilst the use of T-PEDs will still be prohibited once the engines have been started prior to taxi out and whilst airborne, EASA has now joined the FAA and Transport Canada in permitting airlines to allow their use during the taxi in after landing.

The following table provides a general summary of permitted PED use with activated / deactivated ‘Flight Mode’ during the different flight phases (note that the policies of individual airlines may be more restrictive).

The regulators require that airlines provide appropriate information on their PED policy to passengers before flight. This information should include at least the following:

The regulatory guidance referenced earlier also advises that airlines should use recognisable and standard terminology in all announcements about PED use so as to preclude passenger confusion.

It is anticipated that there will be some differences in the PED use policies adopted by airlines. It is therefore stressed that the information to passengers should correspond to the specifics of the policy adopted by the individual airline. For example see the British Airways Policy for on-board use of PED. 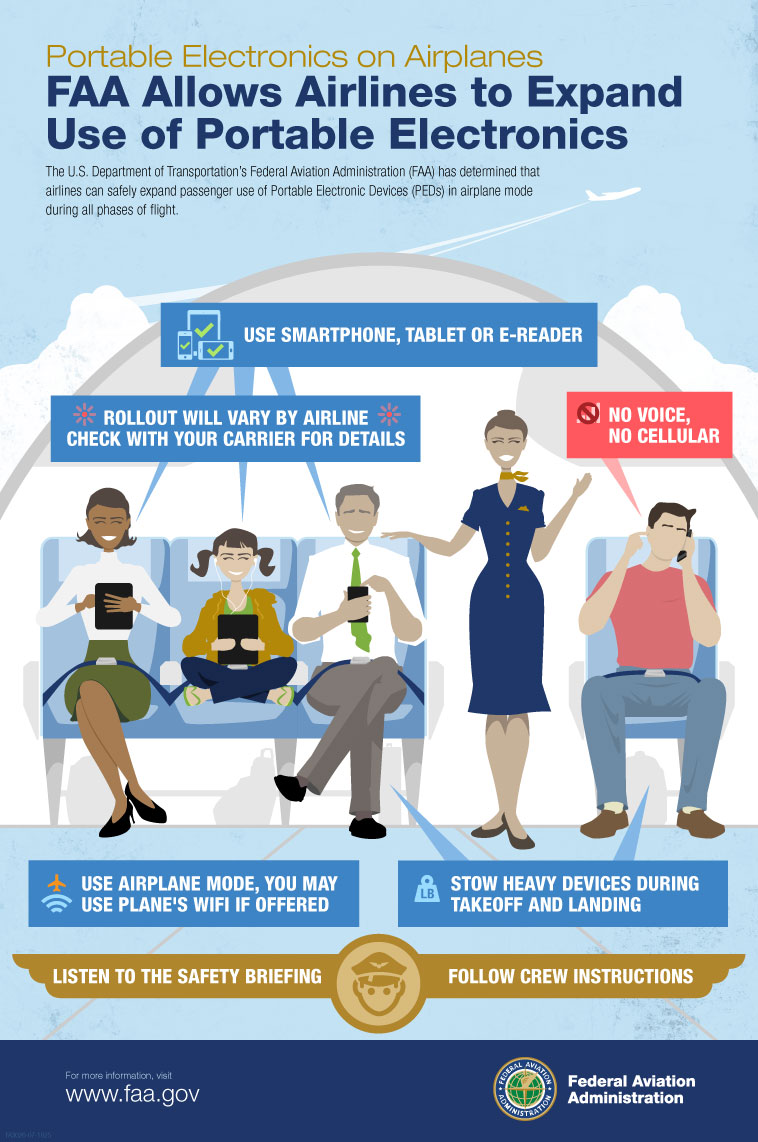 Information leaflet provided by the FAA

It should be noted that whilst the latest regulatory guidance is believed to be sufficient to mitigate the potential threat to aircraft systems posed by electromagnetic radiation from PEDs, its effectiveness depends upon the cabin crew being able to ensure that passengers do not ignore instructions given, which is acknowledged to be potentially challenging. All electronic equipment which is installed in or accepted as an essential crew-use item on any aircraft, for example flight crew EFBs operated independently of the aircraft systems, must comply with appropriate airworthiness certification requirements. Since this is clearly impractical in the case of passengers’ PEDs, the revised Regulatory position has effectively deemed such action unnecessary.

Any T-PED and virtually all non-transmitting PEDs emit low levels of electromagnetic radiation which could theoretically interfere with aircraft avionics when switched on but, unless they are transmitting, even multiple simultaneous use has now been deemed not to prejudice aircraft systems function. Historically, no evidence has ever been presented that correctly functioning non-transmitting PEDs have been the cause of interference or malfunction of aircraft systems. Increasing numbers of aircraft are being fitted with WiFi access which enables controlled passenger access to the Internet in flight via their PEDs. It is common for such access to be permitted only when the aircraft is above 10,000 feet or only made available at the same time as the in-flight entertainment system.

The problem with T-PED use in the cabin of an aircraft in flight has always been that if used to attempt direct communication with a ground station, these devices would have to transmit at maximum power to have any prospect of the signal being received and it has been considered that multiple simultaneous such attempts could create a risk of interference with aircraft systems[1]. It is also the case that mobile phone ground networks are not designed to handle connections from T-PEDs travelling at high speed or at a height where they are able to connect to several different ground stations simultaneously. Any attempt to use them in flight could therefore also lead to network problems and, whilst this is not a flight safety issue, it is a further consideration influencing the continuing general ban on in-flight use of T-PEDs.

The solution to this problem which is already employed in specially equipped aircraft is the use of Picocells. A picocell acts as a pseudo-mobile telephone tower which communicates with T-PEDs on board an aircraft and relays the signals to either satellite or terrestrial receivers. The picocell is designed and maintained for full compatibility with the rest of the on-board avionics. Communication between the picocell and the rest of the mobile telephone network is on separate frequencies that do not interfere with either the terrestrial cellular system or the aircraft avionics much like the on-board phone systems already installed in some commercial aircraft. Since the picocell antennae within the aircraft fuselage will necessarily be in close proximity with passengers, only very low power is needed for both the picocell and mobile phone to connect so that the likelihood of interference with aircraft systems becomes negligible.

Aircraft System Tolerance to PED use

It has generally been accepted that the potential risk of uncontrolled passenger PED use affecting the normal function of aircraft systems has been highest in more modern aircraft where the rise of automation has been facilitated by a rapid increase in the scale and complexity of electrical rather than mechanical system control. A supplementary investigation into the possibility that PED interference had affected aircraft systems prior to the loss of an aircraft in 1988 concluded, in 2013, that it had been unlikely in the case of the 'legacy' aircraft type involved - see the Editor's Note which follows below. The risk that there might be such system effects has been more recently addressed by the Aircraft Type Certification process for new aircraft, which now requires evidence that aircraft systems can tolerate the level of electromagnetic radiation which routine use of a particular aircraft type might generate. Guidance such as the AMC issued by the FAA as AC 20-164 exists.