From a human factors viewpoint, it is also worth exploring whether a conscious, positive action or decision contributed to any improved outcome. If a favorable outcome appears to be merely a matter of chance — that is, no human positive intervention was identified or likely — then the occurrence should be investigated in more depth to obtain an understanding of its causes. There was no positive factor identified. On the other hand, if a positive act or intervention can be identified and classified according to an appropriate positive taxonomy, the resulting data can serve as an important lesson learned for anyone facing the same situation in the future.

A taxonomy is a classification of items into specially named groups based either on shared characteristics or on established relationships as inferred from experience. Taxonomies are useful in understanding how diverse elements, such as the causes of accidents or incidents, relate to each other. Databases structured with appropriate taxonomies make it possible to assess how frequently each causal element occurs.

The current international standard for aviation accident/incident databases is the ICAO Accident/Incident Data Reporting System (ADREP) 2000 taxonomy. It encompasses a causal model built on the human factors SHELL model. Its factors can be articulated at active and systemic levels in a dynamic approach. The ADREP 2000 taxonomy enables an analyst to break down an occurrence into a list of events, each of which is described by descriptive and explanatory factors. In the structure shown in Figure 1, modifiers are available for both descriptive and explanatory factors.

[632 modifiers are available in ADREP 2000. They underscore deficiencies by using negative words, such as: 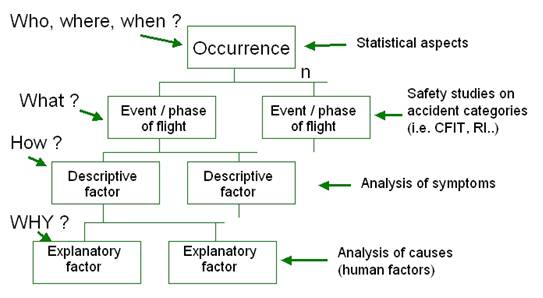 Figure 1: Questions and Levels of Analysis Based on ICAO’s Breakdown of an Occurrence

Now, only failures (active or latent) are encoded by the ADREP taxonomy. The purpose of the coding is to keep track of the frequency (recurrence) of these encoded factors. By comparing frequency with an assessment of severity, risk levels of various undesirable events can be defined. If the factor categories contained both negative and positive modifiers, the data would be inappropriate for calculating risk factors because the frequency of occurrence of each factor would mix both causes of and prevention of the resulting problem. By definition, positive factors cannot be causal in accidents or incidents. For example, if the explanatory factor “human interface-standard operating procedures” encoded with a positive modifier such as “appropriate” were to be aggregated together with the causal factor of “inappropriate human interface-standard operating procedures,” the result would be an erroneous inflation of the causal frequency of this factor.

[In ADREP 2000, the code of this factor is: 401010000. Its definition is: “Factors related to the interface between liveware [human] and Standard Operating Procedures, e.g. the procedure is inappropriate or the manner in which the procedures are written down is ambiguous.”]

Encoding only negative factors in the ADREP 2000 taxonomy ensures that the resulting database can be used to assess the risk associated with human factors causal elements in accidents and incidents. Unfortunately, without the inclusion of positive factors, the current framework makes it difficult to identify actions or situations that were preventive rather than causal (e.g., stopped an incident from becoming an accident). Therefore, it would appear beneficial to develop dedicated taxonomy entries for positive factors. The data to form these factors would necessarily come from the operating experience of the people in the system.

The causal structure found in the events and factors section of ADREP 2000 corresponds to analyzed data and seeks to provide answers to the questions “how” and “why.” It complements factual information (e.g., “who,” “where,” “when,” “what”). Technical safety barriers or nets can already be recorded in the ADREP 2000 taxonomy[1], as implemented in the European Coordination Centre for Aviation Incident Reporting Systems (ECCAIRS).

When analyzing how human defenses may have prevented or lessened the severity of incidents, it is not currently possible to keep track of positive factors such as a successful third party intervention or the correct and timely application of the relevant procedure. If these successful human interventions were recorded, the resulting database would serve a proactive role in accident and incident prevention. This would be in addition to the current reactive paradigm in which data are used to define a defense (a new system or regulation) after an accident. The exchange of these proactive safety data within and between the different organizations involved in safety would be a valuable prevention tool.

Rules and procedures are part of the defenses to prevent undesirable occurrences. Compared to “hard” defenses (e.g., fail-safe designs, engineered safety features, mechanical barriers), procedures, regulations and safety instructions are “soft” defenses that depend on human compliance and therefore tend to fail more easily (Reason, Parker and Free, 1994). Many efforts have been made to study and classify the failures of these human (soft) defenses. Little, however, has been done to structure data on the recovery from dangerous situations. Hence, the need to develop a positive taxonomy for incident analysis.

Benner and Rimson[2] discuss some of the characteristics of a positive safety-related taxonomy. Table 1 summarizes some of their key points.

Various reviews of human factor taxonomies[3][4][5] mention proactive initiatives with ad-hoc taxonomies on human factors but do not include specific entries for positive factors. For example, the human factors analysis and classification system (HFACS)[6] and the line operations safety audit (LOSA)[7] use databases that aim at tracking systemic deficiencies without a coded structure for recovery (positive) factors. ICAO LOSA-implementation documentation mentions that positive data are captured by “written narratives describing what the crew did well” (ICAO, 2002). These narratives are unstructured and cumbersome to analyze.

ASRS coding forms support the recording of “detection and resolutory actions” that can be linked to some occurrences recorded in ASRS. The list contains 34 possible items describing at various levels (flight crew, controller, aircraft or other) an action or an event that was involved in the resolution of an adverse situation. This is an excellent example of positive taxonomy categories.

The Global Aviation Information Network (GAIN) has compiled a list of fact sheets on reporting systems and analytical tools. Of the 38 fact sheets on current and planned government safety information collection and sharing programs across the world, only the fact sheet from the French voluntary and confidential reporting system (REC) explicitly mentions dedicated fields for positive factors:

REC was created in 2000 by the Bureau d’Enquêtes et d’Analyses (BEA, 2002). It focuses on general aviation (GA) to complement the reporting schemes that already existed for French airlines as required by JAR-OPS 1.037 or in air traffic services[8]. The analyzed reports present high quality information on the behavior and decision-making processes of front-line actors. These human factors characteristics are difficult to highlight in traditional accident investigations, especially when there are fatal injuries or liability issues. In addition to traditional fields, the REC database includes a dedicated field to encode the human factor elements that acted to prevent an occurrence from becoming an accident.

[Paragraphs 1.037 of JAR OPS 1 and the French regulation of 12 May 1997 have the same title, “Accident Prevention and Flight Safety Program,” but their content is slightly different. Paragraph 1.037 of the French regulation states: “An operator shall establish an accident prevention and flight safety program which includes an analysis of flight safety or flight parameter recording reports.” This requirement was put in place in response to recommendations after the accident that occurred on 20 January 1992 near Strasbourg, France. Flight data monitoring (FDM) became mandatory in France in 2000.]

Identification of the Need for Positive Factors

A potential avenue for aviation safety improvements lies in recording and disseminating decisions that have proven to be productive during the course of a potentially negative occurrence. One of the justifications for a positive taxonomy is that it provides the ability to learn from successful solutions and strategies applied by others in circumstances you may encounter.

The proposed approach to a positive taxonomy encompassing the types of information contained in the OGHFA emphasizes the positive aspects of front-line operator decisions. It underlines successful actions and opportune judgments. The safety message inherent in compiled positive information complements the recurrent warnings aviation personnel receive about problems caused by breaches such as migrating practices, errors and threats. It places increased emphasis on positive aspects such as: "In adverse circumstances, the human can innovate, make appropriate decisions and therefore provide model solutions for unusual situations to other actors that may face similar situations.”

The REC database was created with the intention of integrating results from working groups such as the ADREP 2000 study group (Corrie, 1995). It also took into consideration studies from:

The list of keywords in REC was created by using adaptive keywords:

For each occurrence, positive factors were encoded such as those that:

In a consistent manner, a list was empirically generated with known recovery strategies, as well as known protections and defenses against dangerous outcomes of failures. They all resulted from the analysis of voluntary reports with a strong emphasis on human factors. The resulting list of 17 numbered factors shown in Table 2 is revisited and updated on a regular basis. Figure 2 illustrates their frequency in the REC database. 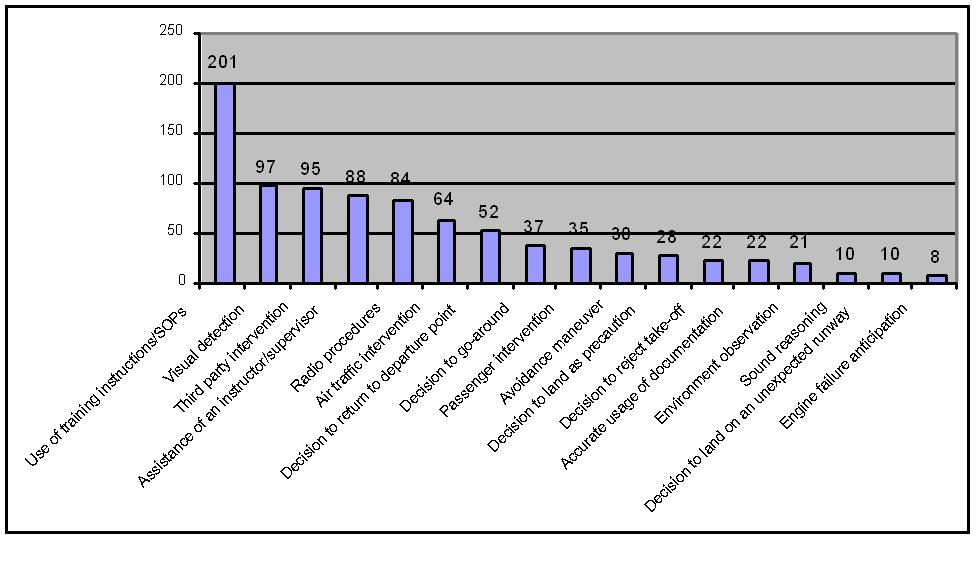 A single occurrence can have several of these factors that worked together to complement each other. The few occurrences that are only descriptive (i.e., with no explanatory factors or causes) do not generally include such a positive factor. Between 2000 and May 2005, 904 positive factors were recorded in a consistent manner. Eighty-one percent of the occurrences include one or more recovery factors. Priority was placed on data quality, rather than quantity, in order to produce a comprehensive and consistent dataset for analyses. This is supportive of the notion that ideas to improve human performance and prevent accidents can come from individual occurrences without having to wait for a "sufficient" sample of incidents to occur[9].

The distribution in Figure 2 illustrates predictable results. It shows that training instructions are probably the most efficient way to prevent accidents in GA. The introduction in ICAO’s documentation on LOSA also highlights that “training interventions can be reshaped and reinforced based on successful performance, that is to say, positive feedback” (ICAO, 2002). Thorough visual detection is also a frequent safety net in the prevention of collisions. Some factors are related to outside interventions, and others highlight the key role of ATC and the decision-making process.

The REC database contains reports from GA and focuses on decision making. From a human factors standpoint, commercial aviation can learn much from GA, especially when it comes to a more in-depth analysis of the decision-making process. This is because:

The REC system is dedicated to collecting and disseminating this type of information to pilots and others in the aviation system. The REC approach ensures that the context of the reported decision making and actions is adequately identified, documented and reported (Benner and Rimson, 1996). It aims to avoid the retrospective fallacy that can be encountered in some investigations when the actors cannot describe their “stream of decisions” (Vaughan, 1996).

Many airline pilots undertook their basic training in GA. In some public transport accident investigations, deficiencies in initial training were identified as contributing factors. Conversely, the judgment and decision making that are core parts of the training of a VFR pilot are generally not revisited in the program for commercial qualification and instrument or type ratings and can be vital to saving the day. For example, the final report of an incident in which a pilot had to perform a “dead-stick” landing in a commercial aircraft stresses: “Although he [the pilot] had never received formal training on gliding approaches, he had experienced doing power-off approaches to landing in a number of aircraft types that he had flown.”

Developing a positive taxonomy is useless if safety investigators and analysts do not contribute to it. Assessing positive factors in addition to looking for the causal elements of a situation can influence the way an occurrence, particularly an incident that did not turn into an accident, is considered. Relevant questions that are typically not included when only looking for causes include: