This article describes vectoring from a geometric point of view. It elaborates on:

Crossing point is the point where the tracks of the two aircraft intersect.

Closest Point of Approach (CPA) is the point when the distance between the aircraft is at its minimum.

The position of the crossing point is easy to determine because it only depends on the planned trajectories of the aircraft and does not take into account the speeds (and wind).

It is also easy to determine which aircraft will reach the crossing point first (even if they are flying at different speeds).

Calculating the precise distance at the moment when the first aircraft reaches the crossing point requires some simple math: D=(D2-D1)+(V1-V2)*t1, where:

The CPA is more complicated to calculate because it depends on the angle at which the tracks cross, and this dependency requires trigonometry to calculate exactly.

Calculating the distance at the CPA

Due to the nature of the cosine function, it is sometimes possible that a relatively small difference of the track angle of one aircraft results in a dramatic change of the correction.

Rules of thumb, given no wind and both aircraft are flying at the same speed:

When vectoring is chosen as a means to solve a conflict, the first task of the controller is to decide which aircraft will have to change its heading. Generally, there are three situations:

Example of vectoring both aircraft 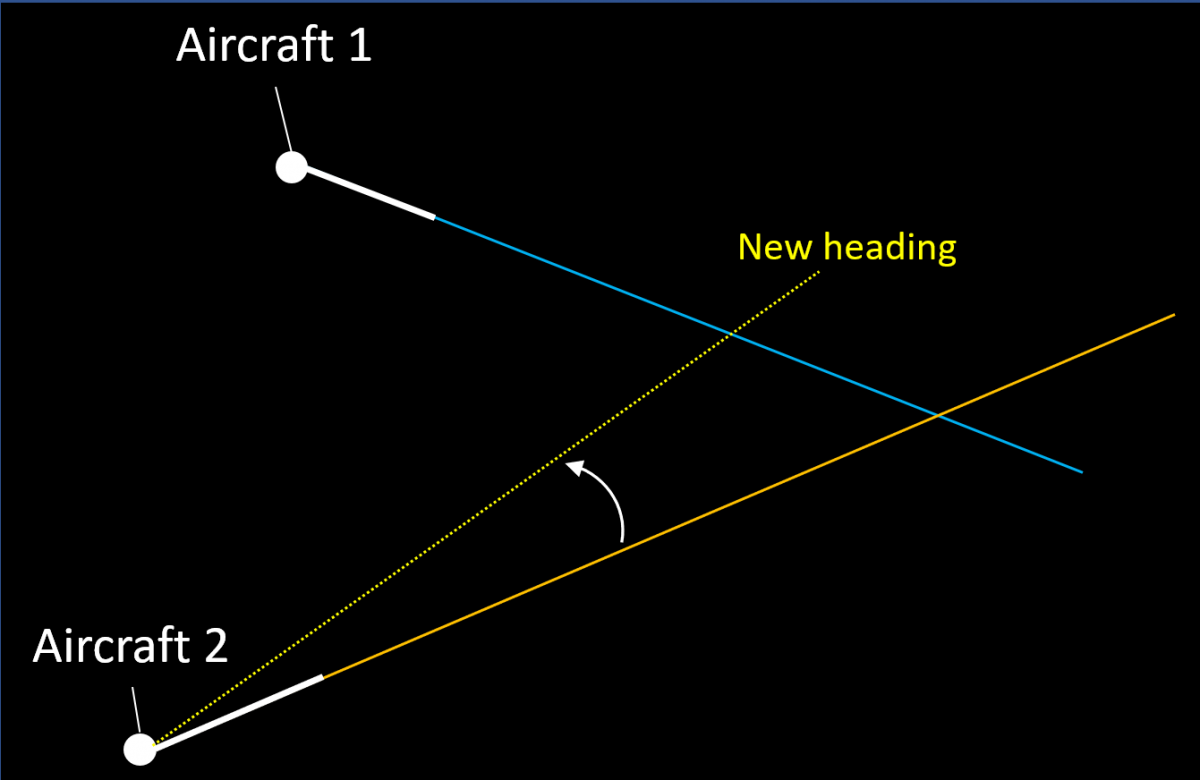 Example of vectoring the aircraft that is behind

Example of vectoring the requesting aircraft, placing it on a parallel track, and finally instructing it to resume own navigation

Note that while the choices above are the most common, it is possible that a particular situation requires a different course of action. This is usually done for safety reasons. Some examples are provided below without the aim of being exhaustive:

After the aircraft to be vectored has been chosen, the controller decides the direction of the turn. The following general principles are used:

Turning Aircraft 2 slightly to the right is enough to solve the conflict while turning it to the left, even by more degrees, does not. 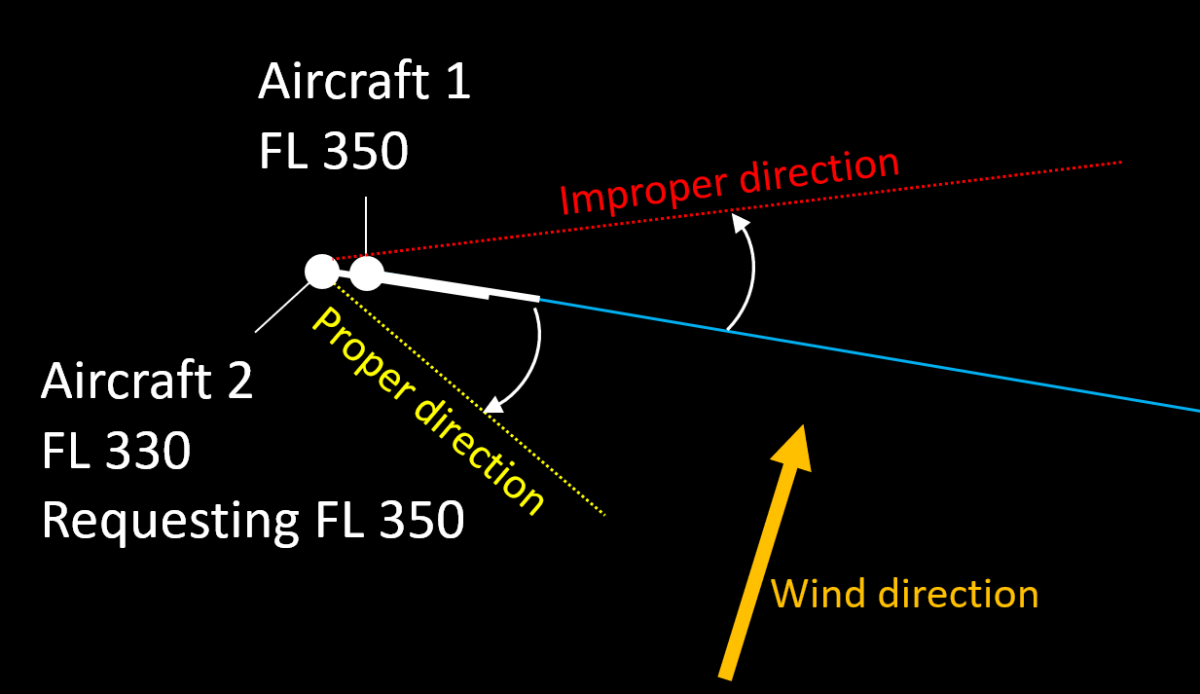 Turning Aircraft 2 to the right allows it to safely climb to FL 350. Due to the speed reduction caused by the wind Aircraft 2 can be sequenced behind Aircraft 1. 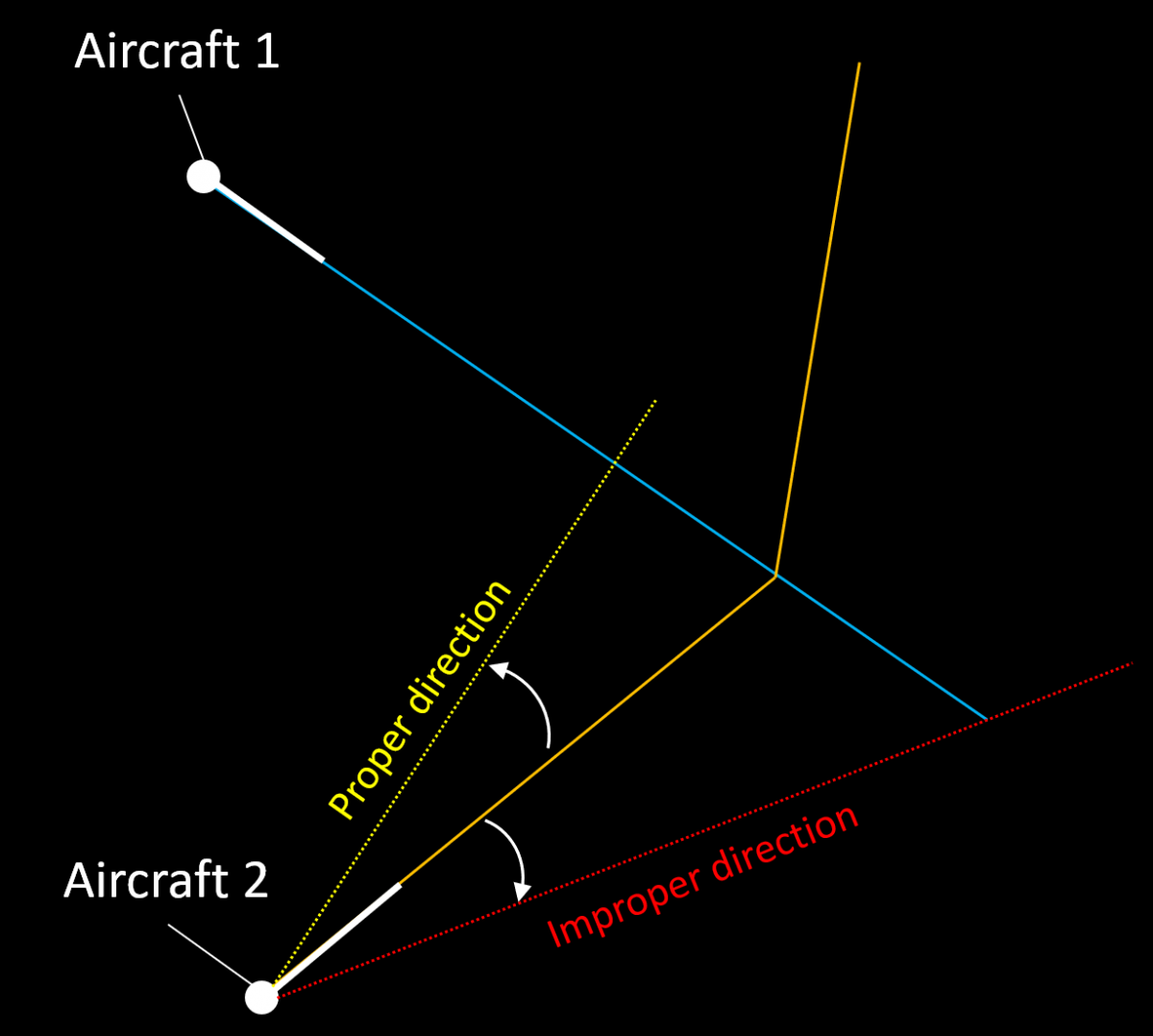 Vectoring Aircraft 2 in any direction would solve the conflict but the left turn would not cause a delay.

Having chosen an aircraft and the direction of turn, the controller needs to determine the extent of the heading change. The track crossing angle is crucial at this stage as it determines:

The general impact of the crossing angle is as follows: