Despite the increased use of hand-held and integrated data-link communication and computer interfaces that use non-verbal inputs, verbal communication remains a vital part of ensuring aviation safety. This is not just between air traffic control and pilots, but between a complex team of players including ramp workers, ground-handlers, cabin crew, aerodrome operators, construction workers, airline staff, security, other specialists and members of the public.

Not all verbal communication occurs face-to-face; indeed, in aviation much verbal communication (perhaps the most critical) occurs remotely via radio systems. For example, post events of 11 September 2001 in New York, the mandatory use of reinforced flight deck doors has also relegated more communications between cabin crew and pilots to the intercom system, thereby removing visual cues and the possibility of written communication. Remote communication is distinct from face-to-face interpersonal communication where, for instance, eyesight and body language feature quite highly to either enhance or confuse[1].

However, in some situations, modern technology is being used to enhance, and sometimes replace, verbal communication i.e. Controller Pilot Data Link Communications (CPDLC), and message boards at de-icing facilities.

The Internationally accepted language for aviation is English and pilots and air traffic controllers now have to meet English Language Proficiency Requirements established by ICAO. Furthermore, some States (including EASA) require a common language be in use for communication within the aircraft cabin and between the cabin and flight deck.

The risk presented by ineffective verbal communication is relatively high. Consequences can be severe, and the frequency with which communication errors are referenced as causal factors in accidents, incidents and occurrences is substantial.

When air-ground verbal communications go wrong, then the consequences can be serious: e.g. loss of separation, altitude deviation, or, runway incursion. Similar consequences can occur when they go wrong on the Ramp: e.g. incorrect loading of cargo; failure to electrically “ground” or “bond” aircraft and refuelling vehicle; or, unsafe approach to rotating engine/propeller. Annually there are around 240,000 injuries on the Ramp and over $5 billion worth of damage[2]

A pilot failing to communicate a need to “go-around”, or a cabin crewmember failing to describe the severity of ice contamination on a wing can lead to catastrophe.

Make a search of NASA Aviation Safety Reporting System (ASRS) for human factors occurrences on the Ramp, and it will show that 37% of occurrences involve communication breakdown. 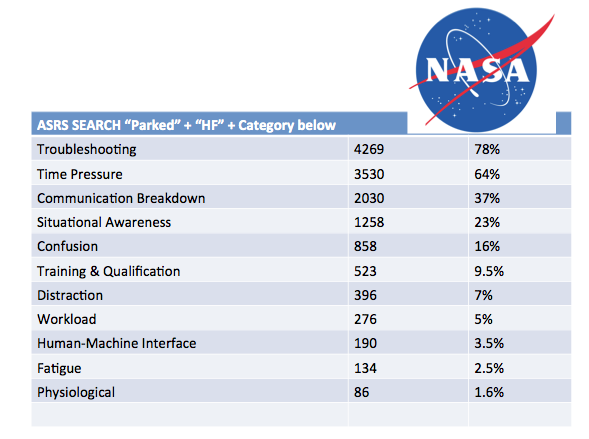 Results from a search of NASA ASRS for Human Factors and parked aircraft.

One of the reasons why poor communication is cited as a causal factor in occurrences is the vast number of other factors that directly impact on the quality and frequency of communication. The diagram below lists only the factors that affect air-ground radio communications, but many are relevant for all types of verbal communication[4]. 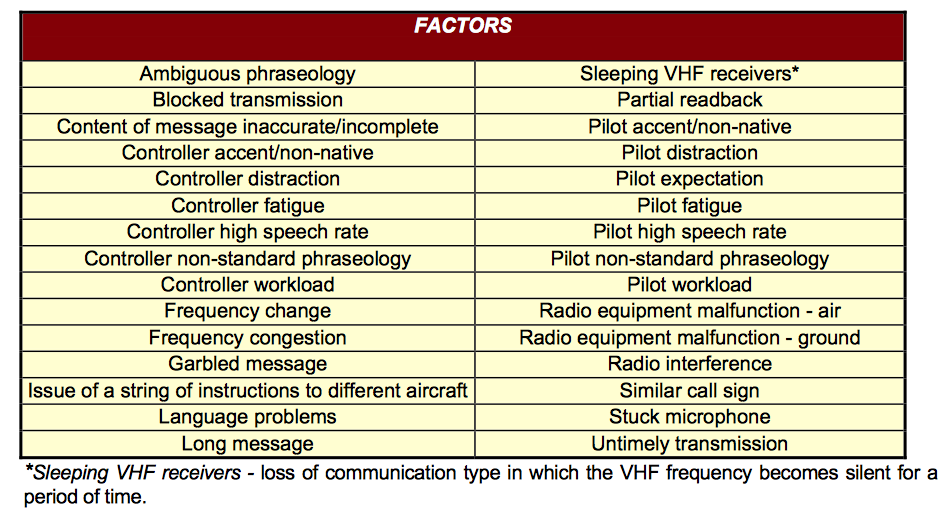 The manner of speech used, when verbally communicating, directly influences the meaning given to the message by the “receiver”. This applies to the objective and subjective messages.

Effective verbal communication relies on a shared understanding of a common language, and also a shared understanding of a common Vocabulary, or Glossary. That is, words have specific meaning within the context of aircraft, aerodrome and air traffic operations. Therefore standardised phraseologies have evolved to ensure “meaning” is conveyed without need for long explanations.

Aviation professionals are usually trained in using radios for remote verbal communication, and following instructors’ advice and by experience, they will adopt a “different” character of speech. Anyone who has used High Frequency (HF) radios to transmit position reports or gather weather reports will recognise their own adoption of an “HF voice and pattern of speech”. This, of course, is an attempt to make oneself understood by speaking slower, pronouncing more clearly, neutralising accent, modulating tone and volume, and emphasising (stressing) certain words.

Non-verbal communication, such as body language, will “add to” any verbal communication when face-to-face and this will convey a subjective message (sometimes obvious and sometimes subtle) that may contradict the objective message: i.e. nodding our head “yes” whilst saying “no”. Otherwise known as incongruence. NB: beware cultural differences in body language though, as the example given would not be incongruent in some parts of Southern Asia. Subjective messages can also be transmitted during remote communication in the manner of speech; it is possible to detect unease, lack of attention or care, uncertainty, and even over-confidence in another’s voice.

It takes more than one person to communicate: the meaning of any communication is the response you get[5]. Ultimately the receiver’s reaction must be monitored for feedback to the transmitter. In aviation scenarios it is expected that both parties have an understanding of the importance of effective communication and both will adopt the responsibility to ensure that the communication is effective; although never assume this!

Summarising the above article, we can list numerous verbal communication errors and contributing factors:

It therefore follows that we can highlight some factors that will contribute to effective verbal communication: