Radio direction finding. Radiodetermination using the reception of radio waves for the purpose of determining the direction of a station or object.

Note: Radio direction finding is a general term encompassing various applications using the same principle of operation. The definition above was initially introduced by the International Telecommunication Union (ITU) and then adopted by ICAO. As VHF is the primary means of communication in civil aviation, the term VDF is most recognizable among aviation professionals.

The VHF direction finder (VDF) is a ground based radio aid that consists of a directional antenna system and a VHF radio receiver, tuned to the operating frequency of an air traffic services unit. Thus, when a transmission is received from an aircraft, the VDF provides the direction that transmission came from (i.e. azimuth relative to the receiver).

VDF stations may operate independently or as an array. In the former case, they only provide the direction of the transmitting station. When two or more VDFs operate together, they can provide position information. This is done by calculating the intersection point of the bearings obtained from the different receivers.

The direction finding principle of operation is not limited to the use of VHF. For example, the UDF (UHF direction finder) operates on UHF frequencies that are used by state aircraft.

An example of a standalone VDF equipment is shown on the picture below:

An example of VDF equipment integrated into the ATS system is shown on the picture below. The circle shows the estimated location of the received radio transmission.

The controller receives a call from IVB3011. This traffic was not supposed to be on the frequency, hence it is represented in a dull (dark grey) colour on the situation display. However, as the green circle indicates the approximate position of the transmitting station, the controller's attention is drawn to a specific, small part of the airspace and they can therefore easily assess the situation and take appropriate action.

The receiving antenna of a VDF consists of several (3 or more) elements mounted around a pole.

Each element receives the same signal but at a slightly different time (i.e. they receive different phases at the same time). This allows the system to calculate the direcion from which the signal has been received. An example of an antenna with three elements is shown below: 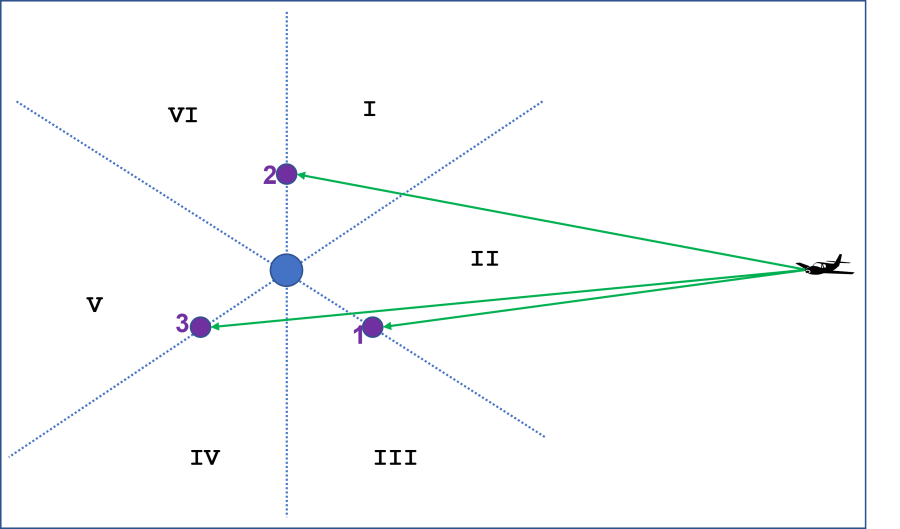 The explanation below illustrates the priciple of how phase (time) difference of the received signal helps to determine the direction of the transmitting station. The dotted lines consist of equidistant point in relation to each of the elements. Thus, the space is divided into six areas. The signal is received by element 1 first, then by element 2 and finaly by element 3, this means that:

The only area that fulfills all three conditions is area II, hence the aircraft is east of the VDF.

Real systems take into account the precise phase (time) differences, which allows them to calculate the bearing of the signal rather than just the general direction.

Depending on the particular implementation (e.g. number of antenna elements), the accuracy of bearing determination may vary. ICAO classifies the accuracy as follows:

Similarly, the classification of estimated position accuracy (when an array of VDFs is used) is made in accordance with the following:

In order for the aeronautical station to properly determine the bearing or position of an aircraft, the pilot may need to transmit a message of specific length or more.

When providing a bearing or position information, the aeronautical station must specify the accuracy class.

Postion information is provided as coordinates, degrees and minutes are used followed by the words NORTH/EAST/SOUTH/WEST as appropriate.

The pilot must read back the information received for confirmation or correction.