This Briefing Note (BN) introduces the concept of mental workload and its relationship to flight operations and safety. It will be useful for designers as well as for operational personnel.

Cockpit design has evolved dramatically over the past 30 years. Increasing automation on the flight deck has added an important systems management function to stick-and-rudder flying. As a result, the mental workload of aircrews and air traffic controllers has received increased attention. Workload is an important focus because errors can be induced if mental task demands exceed the capabilities of the human operators. In turn, the consequences of these errors might be critical and detrimental to safety. To respond to the increased automation, the mental demands imposed by a human-machine interface must be considered as well as the physical taskload it creates. Therefore, a psychophysiological approach (called “psychophysiological engineering”) to the evaluation of human-machine interaction has been developed with a particular emphasis on the mental workload of pilots (Cabon and Mollard, 2002).

Workload might simply be defined as the demand placed on the human operator. This definition, however, is overly limiting because it only includes the requirements generated by external sources (e.g. task difficulty). In order to address workload completely, it is also necessary to consider demands generated internally that compete for an operator’s resources. Therefore, an appropriate human factors definition of workload is:

Workload is the demand placed on an operator’s mental resources used for attention, perception, reasonable decision-making and action.

Because human resources are limited, the level needed for a specific task can exceed the amount available. Under these circumstances, workload can also be defined as the ratio of the resources required by the task to the amount of available resources. Inherent in this definition is the notion of resource differences among operators since each person will have a differing amount and nature of resources to apply to a task. Because of these differences, a given task will not produce the same workload level for all operators. Rather, workload depends on the operator’s experience with the task, training and relevant skill levels. A task can even produce different workload for the same operator at a different time depending on his or her state when the task must be performed. Therefore, workload is an individual experience, and workload measurement methods must take into account human variability.

Figure 1 presents the theoretical relationship among task demand, performance and effort. This model incorporates six regions of task demand that increase from left to right in the figure. In region D (Deactivation), even though the task demand is small, performance is poor because the operator’s condition is affected. For example, the operator in region D might be fatigued or distracted and therefore incapable of coping with even a minimal task demand. 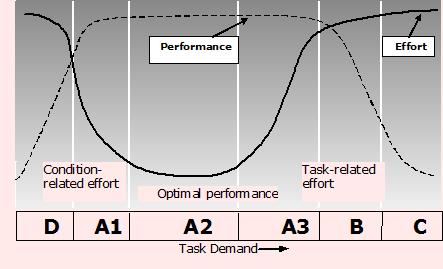 2.3 Workload and Time on Task

Task demand is not the only factor that can affect the effort required by a task. Time on task for a given task demand will also affect the performance and workload of the operator. Figure 2 shows that workload increases as a function of time, even if the taskload is stable. After a variable threshold of time, resources are exhausted and an increase in workload and breakdown in performance are likely to occur. This is because the operator gives up or “sheds” the least significant parts of the task in order to make workload more manageable. 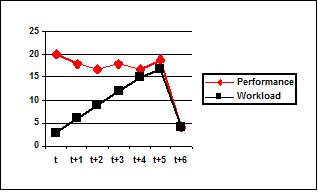 2.4 A Multiple Resource Theory of Workload

Another fundamental concept is the multiple resource theory of workload. Wickens (1984) developed this theory, which defines workload as the demand for resources. Thus poor performance in situations deemed to impose “high workload” is explained in terms of excess demands for specific resources. In this theory, resources are related to each of our senses such as sight and hearing and to our brain’s central processing that is involved in many kinds of tasks. The multiple resource theory is especially relevant to predict workload in a multi-tasking environment. For example, it explains why tasks that require different resources (e.g., a visual task combined with an auditory task) will not directly interfere with each other. The performance of each of the unlike tasks can remain unaffected provided there is no performance decrement caused by excessive brain use. For example, it is often easier to detect a sound while performing a visual task than to detect two competing sounds at the same time.

Direct measures of performance on criterion tasks are one measure of workload. As shown by the de Waard model (see Figure 1), however, they are not necessarily good predictors at the extremes of the task demand scale where high effort is associated with low performance. Therefore, performance measures of workload are often supplemented by other types of measures as part of the evaluation of human-machine systems.

There are three performance measurement techniques that are widely used to assess workload:

Self-reported judgments made by human operators are another type of workload measure. The most frequently used self-reports of mental workload in aviation are the Subjective Workload Assessment Technique (Papa and Stoliker, 1988) and the NASA-Task Load Index (Bittner et al, 1989). The primary advantages of self-reports are that they are provided directly by the operator involved, they can be collected after the task is done, and they are relatively simple and inexpensive to collect. The disadvantages of self-reports are that the operators are sometimes unaware of their own internal changes, and results can be biased by factors other than workload (e.g. psychosocial environment). These disadvantages can often be overcome if subjective measures are supplemented by one of the other workload measurement approaches.

Physiological measures of workload are derived from the operator’s bodily functions. Probably, the most frequently used measure in applied research is the Electrocardiogram (EKG) (Cabon et Mollard, 2002). Several relevant measures derived from the EKG have been used in workload evaluation studies including: