The zodiacal light (also called false dawn when seen before sunrise) is a faint, diffuse, and roughly triangular white glow that is visible in the night sky and appears to extend from the Sun's direction and along the zodiac, straddling the ecliptic, which is the plane of Earth's orbit around the Sun. Sunlight scattered by interplanetary dust causes this phenomenon.

Zodiacal light is best seen during twilight after sunset in spring and before sunrise in autumn, when the zodiac is at a steep angle to the horizon. However, the glow is so faint that moonlight and/or light pollution outshine it, rendering it invisible. 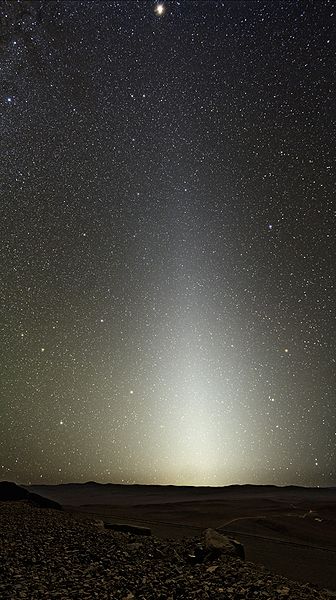 The interplanetary dust in the Solar System collectively forms a thick, pancake-shaped cloud called the zodiacal cloud, which straddles the ecliptic plane. Over 85 percent of the dust is attributed to occasional fragmentations of Jupiter-family comets that are nearly dormant. Jupiter-family comets have orbital periods of less than 20 years and are considered dormant when not actively outgassing, but may do so in the future. The first fully dynamical model of the zodiacal cloud demonstrated that only if the dust was released in orbits that approach Jupiter, is it stirred up enough to explain the thickness of the zodiacal dust cloud. The dust in meteoroid streams is much larger, 300 to 10,000 micrometres in diameter, and falls apart into smaller zodiacal dust grains over time.

The Poynting–Robertson effect forces the dust into more circular (but still elongated) orbits, while spiralling slowly into the Sun. Hence a continuous source of new particles is needed to maintain the zodiacal cloud. Cometary dust and dust generated by collisions among the asteroids are believed to be mostly responsible for the maintenance of the dust cloud producing the zodiacal light.

Particles can be reduced in size by collisions or by space weathering. When ground down to sizes less than 10 micrometres, the grains are removed from the inner Solar System by solar radiation pressure. The dust is then replenished by the infall from comets.

In 2015, new results from the secondary ion dust spectrometer COSIMA on board the ESA/Rosetta orbiter confirmed that the parent bodies of interplanetary dust are most probably Jupiter-family comets.

Zodiacal light is produced by sunlight reflecting off dust particles in the Solar System known as cosmic dust. Consequently, its spectrum is the same as the solar spectrum. The material producing the zodiacal light is located in a lens-shaped volume of space centered on the sun and extending well out beyond the orbit of Earth. This material is known as the interplanetary dust cloud. Since most of the material is located near the plane of the Solar System, the zodiacal light is seen along the ecliptic. The amount of material needed to produce the observed zodiacal light is quite small. If it were in the form of 1 mm particles, each with the same albedo (reflecting power) as Earth's moon, each particle would be 8 km from its neighbors.

In recent years, observations by a variety of spacecraft have shown significant structure in the zodiacal light including dust bands associated with debris from particular asteroid families and several cometary trails.