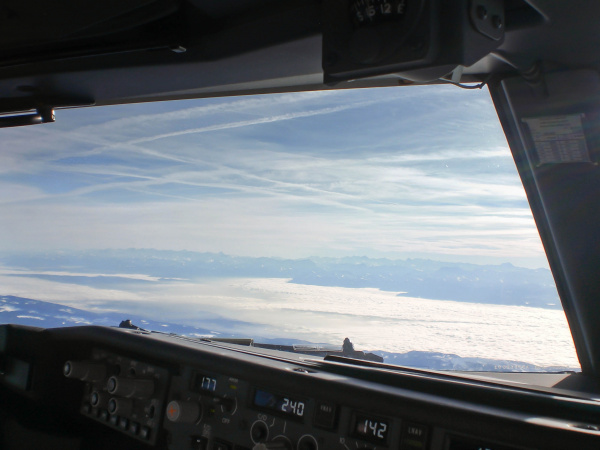 During cruise the flight crew will generally provide a monitoring function, but will also manage ATC instructions and do any necessary paperwork. Constant weather updates will be obtained and occasionally the aircraft will be deviated around weather cells following negotiation with ATC.

The crew will also use this time to prepare for the return leg (if there is one) and will discuss fuel needs, weather, suitable diversion aerodromes, NOTAMS and any other relevant information.

Towards the latter stages of the cruise the PF will prepare for the approach which involves setting up the flight deck and briefing the PM on the approach and what the actions will be if they must perform a missed approach.

Selecting a Direct Route in the FMS

In the case where the instruction “Route direct [waypoint], when on track continue the heading” is given, again it may be observed that it can be surprisingly easy for flight crews to forget to engage the Tactical ‘Heading’ mode once the turn has been completed in the FMS lateral navigation mode. Again the radar controller is unlikely to be aware that the flight crew has not correctly complied with the ATC clearance until the next turning point occurs, upon which the aircraft will this time execute a turn as per the FMS flight plan, rather than continuing the present heading.

During fam flights controllers may observe on the PFD the margin to the ‘minimum’ speed from the current speed as described above.

Go To Descend, Approach and Landing