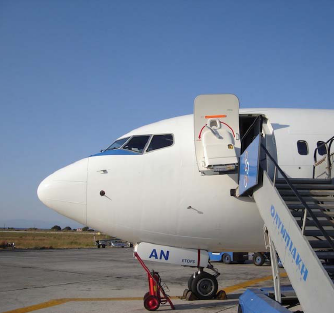 Arriving at the aircraft is a very busy time for both cabin and flight crew as a large number of tasks must be completed in a short period of time. This is particularly true if the aircraft is late coming in from the previous flight.

During a busy turnaround the aircraft is approached by cleaners, engineers, refuellers, dispatchers and so on.

One pilot will normally be setting up the flight deck, whilst the other pilot will be outside performing an external check of the aircraft to look for any defects, bird strike damage, etc and checking that sensors and probes are free from obstructions.

The pilot remaining on the flight deck will power up the aircraft and begin the pre-flight checks. This could mean starting the Auxiliary Power Unit (APU) (APU) and setting all controls in the desired positions, which is usually done in accordance with a checklist. All the emergency equipment is also checked, such as oxygen masks and fire extinguishers.

The flight deck will then be set up for the particular departure that is anticipated (headings, levels and frequencies). This is usually done by the Pilot Flying (PF) as it is he/she that will be managing that particular leg. A very important part is the Flight Management System (FMS) which is the aircraft’s main computer system that to a large extent controls the flight. It must be programmed for the flight; the whole flight must be entered from beginning to end and all waypoints checked. There is also other data that must be entered, such as the Cost Index.

At some point a dispatcher will enter the flight deck with a load sheet showing the final take-off weight and balance figures, which are based on the weights that the pilots provided during their pre-flight preparations. This is entered into the FMS, which in return provides all trip data e.g. fuel required, flight time, max flight level, etc Somewhere in the background passengers will be boarding the aircraft.

A very critical part is determining the take-off speeds, which can be done once the take-off weight is known. There are three speeds that are determined:

Usually a separate book or laptop is used to find the speeds, which are crosschecked and then entered into the FMS. It is worth noting that all take-off calculations are based on an engine failure scenario. In other words, the aircraft should be able to stop on the remaining runway before V1 or safely take off after V1 should an engine fail.

The crew may decide to perform a ‘reduced thrust take-off’ which means using only the amount of take-off thrust required after taking into account several factors such as aircraft weight, runway length, runway elevation and the conditions of the day. This requires a separate calculation which is also cross-checked and the purpose of which is to increase the life of the engines.

The departure clearance is then obtained from ATC and is checked to ensure that it corresponds with the set-up of the flight deck. If there is a delay (slot time) the crew will tell ATC that they are ready, and hope for a better time. This can only be done if the aircraft is actually ready, meaning loaded with passengers and fuel, and all doors and hatches closed.

Use of Cost Index

The cost index entered into the FMS by the flight crew will have a dramatic effect on the FMS commanded climb, cruise and descent speeds. During fam flights controllers can observe such variance in speeds by asking the flight crew to demonstrate this. This can be accomplished by entering on the relevant FMS page the two extremes of the cost index value (i.e. zero and the maximum value) and then viewing the speed consequently given on the FMS ‘Climb’, ‘Cruise’ and ‘Descent’ pages.

Emergency turn procedures are therefore available in the flight deck to enable flight crews to reference them appropriately. Controllers can therefore ask to view such details for their information during fam flights.

Go To Start-up, Push-back and Taxi