An Aerofoil is a shape capable of producing lift with relatively high efficiency as it passes through the air.

An aerofoil can have many cross sectional shapes. Different aerofoils are used to construct the aircraft wings. The designers choose the shape that has the best aerodynamic characteristics to suit the purpose, weight and speed of the aircraft. In order to compare and distinguish different aerofoil shapes, an aerofoil’s properties are defined and specific terminology is used:

Chord is a distance between the leading and trailing edges measured along the chord line;

Chord line is a straight line joining the leading and trailing edges of an aerofoil;

Leading edge is a part of an aerofoil (edge) that hits the air particles first;

Lower surface is the surface of an aerofoil between the leading and trailing edges, on the lower surface;

Mean camber line is a line joining the leading and trailing edges of an aerofoil, equidistant from the upper and lower surfaces;

Maximum camber is the maximum distance of the mean camber line from the chord line;

Maximum thickness is the maximum distance of the lower surface from the upper surface.

Trailing edge is a part from an aerofoil (edge) that hits the air particles last;

Upper surface is the surface of an aerofoil between the leading and trailing edges, on the upper surface;

Different aerofoils have different flight characteristics. The weight, speed, and purpose of each aircraft dictate the shape of its aerofoil. Advancements in engineering have made it possible for today’s high-speed jets to take advantage of the concave aerofoil’s high lift characteristics. Leading edge slats, leading edge Krueger Flaps and trailing edge (Fowler) flaps, when extended from the basic wing structure, literally change the aerofoil shape into the classic concave form, thereby generating much greater lift during slow flight conditions.

On the other hand, an aerofoil that is perfectly streamlined and offers little wind resistance sometimes does not have enough lifting power to take the airplane off the ground. Thus, modern airplanes have aerofoils that strike a medium between extremes in design. The shape varies according to the needs of the airplane for which it is designed.

The pressure differential created between the upper and lower surfaces of the wing lifts the wing upward in the direction of the lowered pressure. This lifting force is known as induced lift. Induced lift may be increased, within limits, by:

Aerofoil surfaces of an aircraft include wings, tailplanes, fins, winglets, propeller blades and helicopter rotor blades. Control surfaces (e.g. ailerons, elevators and rudders) are shaped to contribute to the overall aerofoil section of the wing or empennage.

The angle of attack can be simply described as the difference between where a wing is pointing and where it is going. 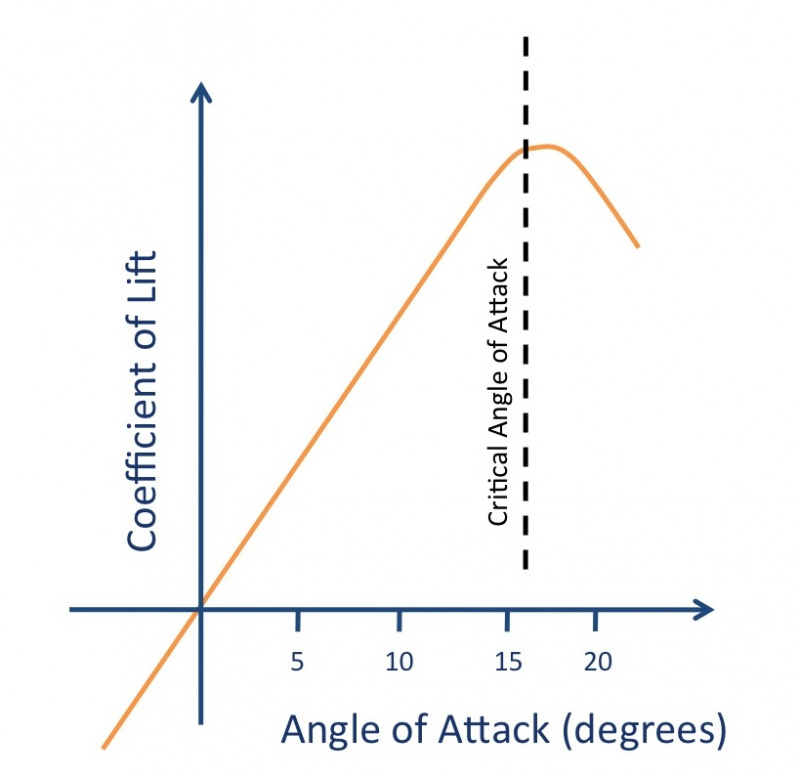 Since lower density air is less viscous, a wing will stall more easily in it and will do so at higher airspeeds for any given angle of attack.

Q1: Leading Edge flaps which, when extended from the basic wing structure, change the aerofoil shape into the classic concave form, thereby generating much greater lift are called:

Q2: Stall is caused by high angle of attack, usually around