Safety and Justice/Improving the system

Safety and Justice/Improving the system

A patient on a ward deteriorated and the team decided he needed fluids intravenously to prevent further deterioration. Getting an intravenous drip connected proved to be rather difficult as the attending physician could not get the needle into a suitable vain. After a three attempts, the trainee anaesthesiologist was paged for help. Even though he was very experienced in placing intravenous lines, his attempts failed as well. More help was called in, but eventually they lost the patient.

When the case was discussed afterwards, there were basically two kinds of responses: “Bad luck, these sort of things happen, it is part of the job, get over it” was one reaction. Another was: “In future, use echo-guidance for finding the vain”; so use more systems and technology. The trainee was not feeling happy with either response; the first being too simple, the second being impracticable for everyday use. This anaesthesiologist in training talked to someone who had seen a lecture by former Top Gun pilot Steve Harden on the “nine red flags” that can help predict an impending aircraft disaster. The trainee felt that at least four out of nine “red flags” had been present. He believed that if he had recognized the situation as having four “red flags”, he would have escalated much earlier and perhaps the patient would have been saved. He decided to share this aviation safety knowledge with the whole group by embedding it in his case presentation during the next Morbidity & Mortality round (level 3: Teaching the system), whereupon the nine red flags system was introduced at his department (Level 2. Improving the system).

The manager of a oil tank construction company noticed that the time windows clients gave for construction projects were getting shorter, and that the teams that were put on projects were getting bigger and also from different nationalities. To counteract this, he purchased an old tank and turned this into a training facility where teams could get together to practice the execution of the projects and rehearse safety procedures before actually starting the project.

The controller made sure that the runway incursion was used as a prime example to change the runway entry design.

We can do this better

A pilot suggested to merge two reporting forms into one, and making it electronically available for more easy access. 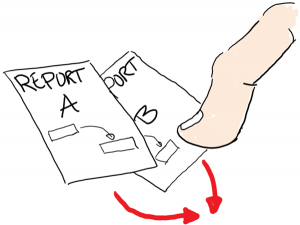