Failure to recognise the possible implications for a stabilised approach of vectoring towards a landing runway which has a limiting or near-limiting tail wind component.

Effect of Action on Flight Crew and Their Potential Response

The required rate of descent on final is liable to be close to the maximum rate of descent recommended or permitted at typical stabilised approach gates and may lead to a go around even if the surface tailwind component remains within the applicable AFM limits for a landing. 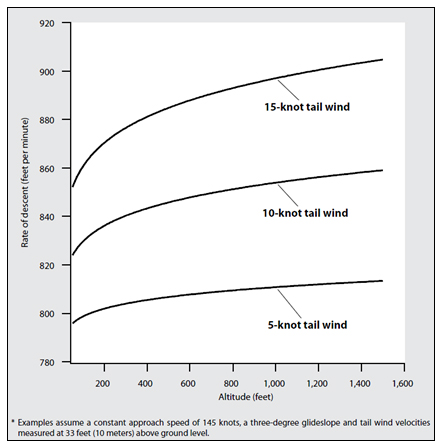 The figure above shows that a 10-knot tail wind, which in most cases is accepted by ATC in the process of runway configuration choice, for a constant approach speed of 145 knots and at 1500 feet requires rate of descent of 850 feet per minute. At 1000 feet rate of descent is reduced by only 10-20 feet.

Based on the stabilised approach criteria, a rate of descent of maximum 1000 feet per minute is required. The above figure is presented for speed of 145 knots. If we imagine though that the plane, due to approach speed corrections or ATC restrictions, is flying at a speed of 160 knots or more, the rate of descent approaches 1000 feet per minute and the “chances” for an ustabilised approach are increasing.

2Moving closer to the ground, if the rate of descent is too high, the flight crew may attempt to avoid a firm touchdown by commanding a high pitch rate. However, if the resulting lift increase is not sufficient to reduce the rate of descent, a firm touchdown may occur. In addition, the high pitch rate may be difficult to control after touchdown, particularly in the case of a bounce. Also a flare that is too high can result in a combination of decreased airspeed and a long float. Since both increase the aircraft’s pitch attitude, the result is reduced tail clearance.

In such case the following effects may occur:

A simple “rule of thumb” is available to calculate rate of descent for a 3 degree glide path:

Example: Ground speed is 160 kts. To stay on 3° glide path the descent rate should be 800 feet per minute (no-wind conditions).

ATC Options to Avoid the Action

ATC Options to Manage the Consequences